At Quick Intelligence we have long been fans of Dmitry Gudkov’s QViewer app, putting it near the top of our list of Essential QlikView Tools. This month sees the release of the latest version, and some neat new features.

If you have not previously used QViewer, but you have created or consumed a QVD file, then you have been missing out. Prior to this product being available the only way to interrogate the data within a QVD file was to create a temporary QlikView app, load the file and view it there. There is merit in this approach, as you get to use the associative engine and Qlik objects (you may even add our data profiler), but often it is overkill for a simple file.

You may, or may not, be aware that there is a lot of meta data stored within each QVD you create, as this can be viewed in QlikView or Qlik Sense by loading from the XML header, as described in a previous blog post. Again though, this means creating a separate file that needs to be deleted after use, and takes a short while to build.

Enter QViewer, this small utility (the installer zip is only 742KB) is associated with QVD files, allowing you to simply double click them to open them. A full table view of the data is then given, with the ability to get distinct lists of column values (like a Qlik List Box) and menu items for getting to the meta data and lineage information. All data sources that have fed into a QVD’s creation are listed, as is a link directly to the QVW file that created it.

As the product that already did everything that it said on the tin, it is good to see that there is much that is the same between this new version and it’s predecessor. All the menu items are in the same place and the UI is familiar.

The first change you will probably notice is the Most Recently Used list on the start screen. Whilst not revolutionary, this is a nice addition: 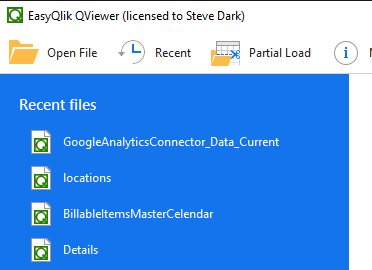 Once you open a file though things get more interesting. Nestled among the familiar menu items is a new button, Find. 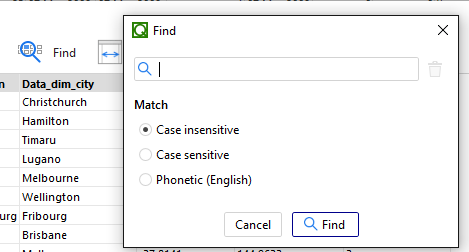 Whilst you could previously seek for a value in a specific column, you needed to know which column to look in. This new find dialog searches across all columns at once. Also, in the previous version, when a value was found it was still shown in the midst of all other data, in the new version the data is filtered showing only matching rows:

Note also the Sense style selection bar along the top, showing which search has been made to give you the rows you are seeing. This is a neat way to track and remove selections, which leads me on to what happens when you double click on a cell.

This ability to filter data makes the need to load the QVD into Sense or QlikView less likely for many tasks, speeding up simple data interrogation and development time.

As well as the major updates there are a number of other tweaks I have been noticing whilst using the tool. The list box type view of fields now has an indication of how many instances of each value have been removed as a result of selections – something that is not done in the Qlik products themselves natively. The feature that generates your load script for you (under the Table Metadata menu) now has a preview of the code before you copy it out, this saves you pasting code somewhere before realising it is not quite what you want.

I’m sure that there will be other things that I will notice as I get to spend more time with the new version also.

Something that I have not found, and would have been a nice addition, given the filtering options, is the ability to save out a filtered sub-set from the QVD. This is functionality which is core to EasyQlik’s other product EasyMorph. This tool gives a simple UI for data preparation, and is integrated as a jump off point from QViewer – this is a topic for another post though. 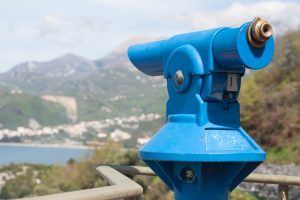 As at now version QViewer 3.0 is still at beta, but in the time I have been putting it through its paces I have not spotted any issues. You may want to wait for the first full release before putting the new version into a production environment, but I would not expect to see issues.

There is a limited free version of the product, which loads only 100,000 rows. The software is not expensive, and there is an upgrade discount for people who have already purchased a licence for a previous version. Whilst the tool is still useful with the 100,000 row limit in place I would urge you to purchase a licence, as it would be great to see more future versions with more innovative and useful features included.

Thank you Dmitry for a great tool.