This series of posts is designed to capture the things that I do all the time when building QlikView apps that may not be so obvious to others.  This quick tip certainly falls into this camp.  If you have ever wanted to move the legend or a label in a chart but have been unable to do so – read on.This is something that I was shown how to do way back when I went on my first QlikView training course.  Before the course I had dabbled a bit with QlikView with a bit of help from the manual and QlikCommunity.  It was when I was shown that you could move object around within a chart object that I realised I could solve some of the issues I had with chart layouts on the documents I had been playing with.  Thanks to Jonas Valleskog for that enlightenment.

Since then, I had assumed that this was something everyone knew from their initial QlikView training.  However, on numerous occasions I have used this functionality in the presence of other reasonably experienced QlikView developers and been surprised to find they were unaware.

So… to try and put an end to this here is the simple step you need to take to move objects around inside a chart.

Simply select the chart you want to re-arrange and hold down Shift and Control at the same time.  You will see all the items within the chart get a red border to them: 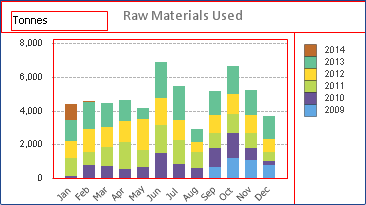 You can then drag the individual items around inside the chart.  This include the position of the chart itself, the legend and any text in chart items that you have added.  I should warn here than things can sometimes be a bit temperamental –  particularly with objects snapping to the side of the object when you don’t want them to – but with a bit of patience you can usually arrange things how you want.

I don’t expect masses of ‘wow thanks for sharing’ messages for this post (as I got for Hidden QlikView Features) but if you have been stuck not being able to move your Text In Chart then you will know how useful this tip is.

Just one of those features that is not entirely intuitive, like holding the Alt key down to then drag and move a chart or list box object that doesn’t have a caption…

This post is part five in the Back-To-Basics series of posts.