We have long been supporters of QVSource, using it for Google Analytics in house and providing it to clients for accessing content management and social media feeds. The new incarnation of QVSource is currently in beta, and I have been lucky enough to put it through it’s paces.

QVSource is the de-facto way of connecting to data sources that natively QlikView and Qlik Sense can not handle. The product has it’s genesis with social feeds, such as Twitter and Facebook, but can connect to many data sources including on-line databases and on-line storage (such as Google Drive). With connectors for open JSON/XML/SOAP APIs the list of sources is opened up much further. As well as strong software, QVSource scores high with legendary technical support from the developers – who are always amenable to getting the product to work for their customers, regardless of the data source.

Given this I was intrigued when I heard the product was being upgraded to a web version, and very happy to be contacted as one of the beta testers. In this blog post I give my first impressions of the forthcoming version.

As with the previous version of QVSource installation was a simple affair, simply opening a zip file and copying the files to the required location. Right clicking the .EXE and running as administrator was all that was needed to get things running. A small window pops up containing a link to the configuration site (on a new port on the localhost machine) and we are then in the web configuration page.

From here on in pretty much all settings are done in the browser. Given that this is the way that Qlik Sense operates for building applications it is fitting that QVSource now operates in a web environment.

The thing I wanted to test out first was putting QVSource Web Edition on a different machine to my Qlik development box and do everything remotely. To this end I ignored the pre-requisites and installed on an old Vista Home laptop (so far no problems seem to have arisen from this). In order to make things accessible from other machines a small tweak was required to the config file in the installation folder. This is documented in the QVSource Web Edition settings page itself so was easy to find the file to modify. Similarly adding the trusted remote IPs and allowed host names was a cinch.

Licencing is done in a similar way to the previous version, uploading the licence file after entering the provided key. As you would expect this is also done via the web interface.

With this done everything else can be done from the other nominated machines on the network.

What I was intending to do to test the new web version was to connect to it from another machine and refresh an existing document, doing all of the configuration remotely. The application is one that monitors time spent by our support desk staff, pulling data from Google Calendar. The how-to explained as far as the Qlik load script code was concerned the only change was to the server name (from Localhost to the machine name now hosting QVSource Web Edition). With this change made I set about making the QVSource configuration changes.

The configuration page appeared when referenced from a remote machine exactly as it had when referred to as LocalHost on the machine it is running on (thanks to the allowed IP address and host name being configured previously). On the front page I was presented with a number of links, some of which will feel immediately familiar to users of the previous version:

Here are the Settings and Licence options, which I used on the host machine to configure it. There are also links to Support and Change Log here. One of the nicest things about the new QVSource interface is that everything is to hand where you want it. As the configuration screens are browser based it feels like a natural extension of the config to go off to the (incredibly helpful and detailed) wiki pages, which give you all the information you need on configuring connectors. Similarly, the results of the last extract or connection logs are all close to hand through the links at the top of the page.

The Connectors button shows you how many connectors you have available, and clicking on it brings up a list of them. They are split into licensed connectors and Beta ones. Clicking on a connector allows you to configure it.

Here are the options for the Google Calendar connector:

From here you can pick which table you wish to load from. As with many of the connectors you need to pull from one (here Calendar List) in order to find a parameter for another (Events). On attempting to get a list of calendars QVSource realised it wasn’t authenticated to pull information from Google, so prompted for an authentication key: 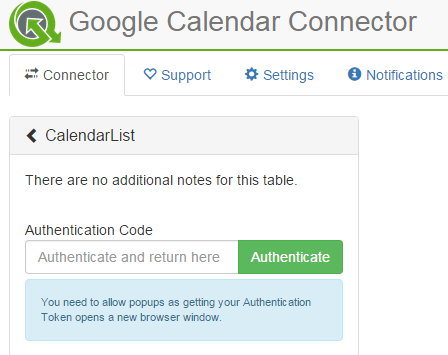 As you can see from the image, there is a button to go off to the authentication page and helpful text to guide you to ensuring you authenticate correctly. All the way through using the product you get the feeling that someone has put thought into exactly what information someone is going to need to complete the task in hand. Once the authentication code has been obtained it can be copied and pasted and applied to the QVSource settings: 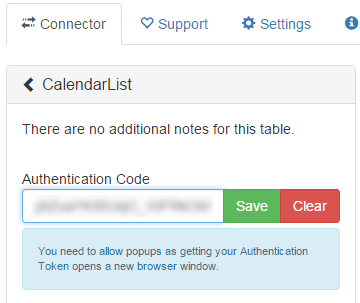 Once authenticated with Google, tabs are shown with the legends Data, QlikView and Qlik Sense. As with the non-web version you get a sample of data, and the load script code that is to be copied and pasted directly into a QlikView or Qlik Sense document. The data view is clear and just what you need to confirm you have got your extract right – it may even be all you need if you are just looking for a parameter to pass on to another query.

As with the Desktop version, I would like to see a link here to download the data in the preview – perhaps as a CSV or a QVX file. It may be that in some cases, where things are decoupled for whatever reason, that having the download to QVX is what you need rather than a load script. Hopefully this link may appear in a future release.

Talking of the load script, this is available in QlikView and Qlik Sense flavours on the next two tabs: 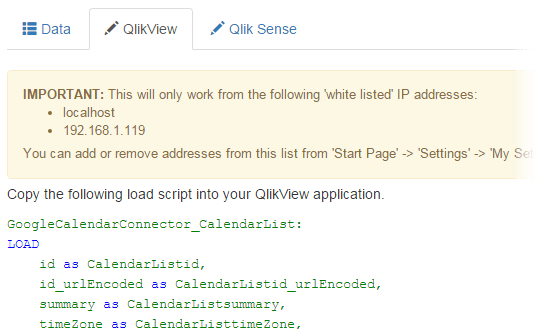 Once again here you can see the helpful guidance given by the tool as to how to use what you are given.

All in all, from downloading the beta zip file to being in a position to populate my QlikView app from QVSource Web Edition across the network, the whole process was complete in well under an hour. A painless upgrade.

With the change made to the load script, and our connector now authenticated on the QVSource site, it was simply a case of clicking the reload button in QlikView and the data refreshed without issue. As this is beta software I was concious that I may be fiddling around for a while to make things work, but actually it was quite the opposite. Rather than the web interface confusing matters it actually provided good sign posts as to what needed to be done. The simple functionality of the old version is still there, just made more accessible.

Being able to get to a web config page is going to simplify for us from a support stand-point for our clients who use QVSource. Where currently we have to RDP onto the box where the QVSource service is running to make any config tweaks or generate new scripts, we will be able to simply connect to the required VPN and use the web interface. This is a step saved, and often a lot of hassle avoided where the default limit of two connected users to a Windows Server has been met.

As everything seems to be going mobile these days, I also tested the Web interface on my Android tablet. I’m pleased to report that this worked fine also: 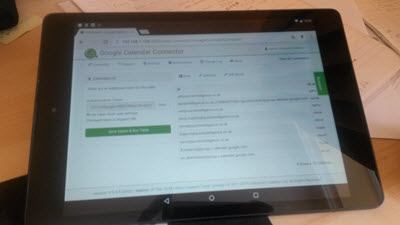 Not that I can see anyone setting up connections to new data sources in the back of a taxi between meetings (to pinch a Qlik example about where Sense could be used) it is still good to know the product is moving with the times. With Sense now having the ability to create apps from scratch in the browser alone it makes sense that data connections for these apps can also be created in the same browser.

With no issues being apparent in my usage of this beta version so far, hopefully QVSource Web Edition will be generally available in the not too distant future.

Many thanks to Industrial Codebox for giving me a copy of the beta to try, and allowing me to publish this review.