Whatever .Next? Thoughts on QlikView .Next

With another iteration of the QlikView.next vision document now available and .next no doubt featuring in the upcoming UK Business Discovery event it feels like a good time to get some thoughts down regarding the platform. 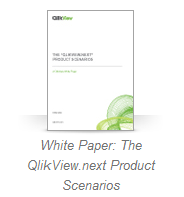 Reading the white papers and QlikTech blog series (which I recommend you do also) the first thing that is apparent is that this is not another ‘evolution not revolution’ release. With the core functionality of the desktop app largely unchanged from when I first started using it this feels like an exciting step forward.

The thing that is immediately apparent is that QlikTech are totally aware of the consumeriszation of all things these days. All of us now seem to be tech savvy with high expectations of what technology should deliver for us – and we demand it to look good and perform well. It perhaps then comes as no surprise at the trailblazers in this revolution are referenced in the material QlikTech are putting out there – Apple and Google being held up as examples instead of the thoughts of analysts like Gartner being the thing to aspire to. This makes sense, as QlikTech want to put the power to analyse into the hands of users who may not have even heard of Gartner – but who will certainly care about their latest phone.

Talking of phones, mobile is where the redesign of QlikView is beginning. As it is a tricky thing to get right (with many saying the v11 Ajax client is still not on a par with the thicker client) it is good to know that it is getting the attention it needs.  In fact the browser is such a strong focus it is even expected that all development will be (or at least can be) done in the browser.  This may sound like a bit of a leap, but in fact Rosslyn Analytics cloud-based RA.Pid app development platform providing QlikView as-a-service is an example of .next now. Personally though, I hope that the requirement to have an internet connection or even a server is not a pre-requisite – as this would rule out (for example) working on the train in the UK, which is surely the very definition of mobile?

Something that I would not be sad to see less of in the future releases is the reporting functionality. The product scenarios white paper suggests that paper based reports should be created by exporting data from .next and handing that to a dedicated reporting tool. This is something that I have recommended to clients at previous versions also. QlikView has always been an analytics tool rather than a reporting tool and I feel it is no bad thing for future development to focus on the products strengths rather than it’s weaker features. WYSIWIG printing of individual objects has been promised though – which is kind of the minimum expectation – it’s disappointing at the moment when you see exactly what you want on screen only to have that not represented correctly on the page. It will be interesting to see if a third party steps up to the plate to deliver a full featured reporting tool for QlikView.next – QlikTech mention in their blurb that they are looking to empower partners to provide a full ‘ecosystem’ around QlikView, so perhaps this is where the reporting functionality will emerge from (NPrinting.next, maybe?).

The only glaring gap I can see in the technical papers that have come out so far is any mention of the upgrade path from previous versions. It may be that the development of the future releases has not got to the point of addressing this as yet. As anyone who has used QlikView for some time will be aware, documents that have been created in QlikView Desktop at one version can be opened with no issues in another Desktop version or be published via a Server at a different version. I frequently at the moment develop in QlikView v11 and deploy to QlikView v10 Server, and I did the same between v10 and v9 before that. With so many large QlikView deployments out there now if the upgrade path to QlikView.next is not so seamless then it could cause many problems and much expense for existing customers. If anyone is in the know about the upgrade path perhaps they could add a comment below?

On the flip side, the most encouraging thing that I have noticed is that there does not seem to be a massive rush to get this to market. There seems to be a desire to get things right and stable before anything is shown outside of QlikTech or any mention of release schedules is given. I blogged on what I felt was a too high a churn rate of releases (see: Please Release Me, Or Not) when QV11 first appeared as a beta. The stakes are now incredibly high for QlikTech and I really hope that when .next emerges it is the platform that it should be and is as stable and secure as it’s users require.

All in all, I find myself quite excited about the future of QlikView right now. There are many other products entering the analytics space, some of which score points over QlikView in some specific areas. If QlikTech were to just tread water and sit back on the fact they have an exceptional product at the moment they would at some point be surpassed by a newer fresher tool. The information that is coming out regarding .next proves that QlikTech are not going to let that be the case. As someone whose entire working life is spent living and breathing QlikView this is great news and I am looking forward to what the .next step forward is going to be.

[Note: a follow up to this article has been published post the Business Discovery London 2012 event]
[Further note: More up to date thoughts around .next can be found in the post Further QlikView.next Thoughts]